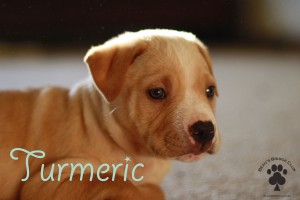 Meet Saffron and Turmeric, two lab mix puppies. These babies came in with six more siblings, their mom, their aunt, and five cousins! Big family (and a big reason to spay or neuter your pet). 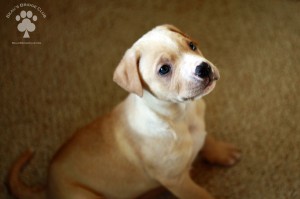 Turmeric in one of his rare mid-play sits 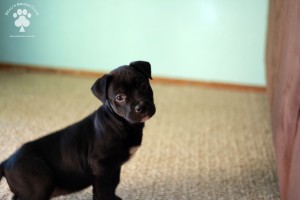 Tony La Russa’s Animal Rescue Foundation (ARF) was kind enough to take this extended family in when the two moms had just given birth. The moms spent six weeks caring for and weaning the large brood of newborns in two great foster homes. Soon, space was getting cramped with large and rowdy six week old puppies taking over the house. Being completely weaned, the puppies were ready to be split up and put in their own foster homes. That’s when Saffron and Turmeric entered my life.

They came into my home at six weeks of age and continue to grow like weeds. Within two days, they had put on three pounds each! I’m not even sure they took in three pounds of food during that time, but there they were getting rollier and pollier by the day. 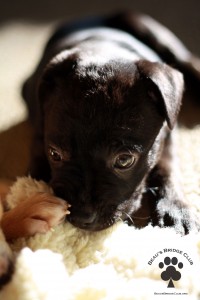 Play hard, sleep hard seems to be their motto and they follow it with determination. Their nursery, also known as my guest bathroom, is where they spend a good chunk of their day napping (and occasionally having a good wrestling match), but what they really love is being let into my kitchen/living room space to run and run and wrestle and play and run some more. Once they have done that for about an hour straight, they are ready for more napping. And when I say ready, I mean nothing can stop them. They enter the cuddliest ragdoll setting I have ever seen a puppy do and nothing (not treats, toys, jostling, noisiness, or intense sniffing from dogs five times their size) will wake them up until they are ready to play again.

I imagine when they grow up, they’ll be great running buddies, but also fantastic cuddlers. 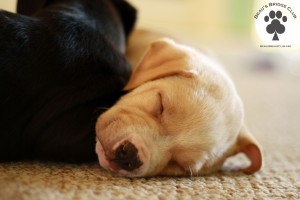 When it’s time to sleep, there’s no better cuddle buddy than your sibling

If you are interested in adopting either puppy, let me know asap by shooting us an email.